Neubruecke Elementary School opened its doors in 1974 in one wing of the deactivated 98th General Hospital Building that, at one time, was a 1000 bed Army hospital that had opened in September 1953. The hospital provided medical services from 1954 until 1973 when it was deactivated and placed on "turn-key" status (later to be reactivated during the Iraq War). After the deactivation, the 55-building complex was taken over by various Army, Air Force, and NATO units to include the school, when NATO forces activated the Boerfink Bunker. The Neubruecke Wildcats, led by the school mascot, Socks, began many traditions that became associated with the school. Among the traditions were being on the cutting edge in technology, having an active PTA that was involved in making a school community, having unique study trip opportunities, and thriving on partnerships. Active PTA, Spouses Club and Student Councils worked on fund raising activities in order to provide special and unique study trip opportunities. The students traveled to places such as Garmisch, Rothenberg and Paris. The Paris study trip was a tradition that continued well into the 1990s.

The school, with an average daily attendance of 375, was moved from the hospital building to the new school building during January 1987, with the exception of the kindergarten, which remained in the hospital building because of a larger enrollment than anticipated when the new school was built. In 1993, there was enough of a decrease in enrollment in the main building that allowed the kindergarten to move, the whole school finally under one roof. By 1994, NATO moved out of the Boerfink Bunker and therefore, the US Air Force deactivated their mission there, and left the Neubruecke facilities. That summer, the Army, from Baumholder, took over the housing area making it a bedroom community for the Kaserne. Over the summer an almost totally new school population moved into the Neubruecke school community. The enrollment dropped to 250 students during that transition. During 1996, the Idar-Oberstein school was slated to close due to smaller enrollments, and so it was decided that those remaining students would come to Neubruecke. After that decision was made, Neubruecke and Idar-Oberstein schools developed a partnership to make the school transition work seamlessly. Shared programs, shared field day, and visits by the Idar-Oberstein parents and students took place during the spring before the students moved to Neubruecke which ensured for a smooth transition. The school enrollment went back up to 300.

Neubruecke Elementary School had some very unique and wonderful programs which were ahead of the time, teaching 21st century skills in the 20th century for students, in addition to sound classroom curriculum. While in the hospital building the teacher for Gifted Education worked with the Information Specialist to teach student film development on Atari computers. When the new school was planned, it included a studio and closed circuit TV. When the new building opened, Neubruecke Closed Circuit TV, NCC-TV, weekly news shows were a part of the culture of the school. Parents, students and staff loved being a part of that and watching the students rise to the challenge of writing, producing, and anchoring the live programs broadcast to the entire school every Friday. Additionally, students learned how to work the video cameras and the editing machine in the studio as well as taking cameras round the school to film special events that would be included in the NCC-TV news shows. Furthermore, student teams developed films to participate in the DoDDS-Germany Media Fest. Neubruecke entries were the only elementary school entries when the fest started.

Neubruecke was the first elementary school in DoDDS-Germany fortunate enough to have a full computer lab in the Information Center in the 1980s. After several years of using Apple computers which had aged, the principal at the time put in a request for a grant from the DoDDS Germany Area Office to update and extend this lab by funding the wiring of the school for complete school network as well as attaining enough new computers for the completely updated wired lab.  Additionally, every classroom had at least three computers connected to the internet. The grant was funded for the hardware and supplies to develop the network. The work to install this was the result of the partnering with a U. S. Air Force 86th Communications Squadron of Ramstein Air Base, commanded by one of the parent patrons of the school. Several military members of this squadron donated their time in the evenings and on weekends to install the network, with the guidance and help of an Area Computer Chief who brought needed supplies and materials, and worked as a team member for quality work. The PTA provided meals and snacks for the volunteers. As a result of this important partnership and grant, the school became the first elementary school in the district to have a completely wired school network, where students had access to the internet with computers in the classrooms as well as in the Information Center.

During the years that Neubruecke was a “NATO” school, partnership programs were organized with the NATO British and French schools as well as the local German school. In addition to those partnerships, another unique partnership occurred. During September 1994, the majority of the Neubruecke hospital complex was turned over to the German Government, which converted the buildings to the “Umwelt Campus” (Environmental Studies Campus) of the University of Trier. After much renovation and construction, the new branch of the University of Trier opened. Neubruecke Elementary School and the “Umwelt Campus” developed a partnership. The University students presented lessons and units of study about environmental best practices, the history of the area going back to Roman times, local German traditions and customs, as well as enjoying time assisting with Field Days. In turn the German students were invited for special American traditional events such as the annual Thanksgiving dinner. It was great for the University students to practice their required English Language skills, and it provided expanded learning opportunities as well as role models for the elementary students. During this time the students and Student Council decided that the wildcat mascot, Socks, was outdated and they voted on introducing the modern, Will the Wildcat, which everyone loved!

During 2001, Vanderbilt University conducted a study after reviewing the 1998 and 2001 National Assessment for Education Progress (NAEP) results which had a consistent, interesting trend. Specific data indicated that even though there was a 35% mobility rate and that over 50% of the students qualified for free and reduced lunch, and 80% of the parents of students had no more than a high school education, minority students in 1998 scored 1st place on the NAEP in DoDDS schools. The TODAY SHOW was fascinated with this type of success and so they coordinated a special investigative journalism visit to Neubruecke ES as well as Baumholder American Middle High School as model schools to study regarding this data. They featured parents, students and staff to affirm why such outstanding progress of students was affirmed by the NAEP. They interviewed parents, student and teachers, even visiting families in their homes, as well as community members to highlight the qualities of the DoDDS education system that appeared to make the difference. At the time, General George Casey supported and assisted in this national news coverage that highlighted the amazing work of DoDDS schools to have minority students, as well as all students, reach such high levels of academic success on national assessments.

The school enjoyed an active PTA that supported the teachers and programs in the school. Additionally, the PTA worked with the principal to make the school the center of the community, especially during deployments. The PTA, parents, students and teachers became a strong “family.” The teachers and PTA worked together because they were aware of how the deployment affected the families. The PTA organized many events to engage all the families and offered support to all the teachers. Monthly events included pot luck meals, spaghetti dinners, and bar-b-que dinners followed by programs that included the parents, students and teachers, such as the Annual Student Parent Teacher Talent Show (which became such a strong tradition with amazing acts, the people from the Baumholder Military Community, the Umwelt Campus and local partnership schools would come to enjoy it), Drama Club productions, music productions, the Annual Fall Carnival, Bingo Nights. The PTA assisted with the purchase of materials so that the Film Production Crews could develop videos of what was happening at the school to send to the deployed soldier units. The PTA provided luncheons on Mothers’ Day, with students serving, during deployments.

Neubruecke Elementary School was fortunate to have a partnership with 8th Finance from Baumholder. This amazing military unit provided assistance throughout the school year, to include cooking burgers for open house and field days, assisting with field days, and assisting the school when some “lifting and toting” was needed to rearrange materials as the use of the facility changed over time because of shifting enrollments. The 8th Finance joined the school in developing a mentorship program for students who had deployed parents. The mentors visited their students at the school and assisted them in studying, being a “friend” as well as attending celebrations and events to show solidarity with the students. When 8th Finance deployed, the students became active pen pals with their mentors. Very special bonds were developed between the soldier mentors and the students they mentored.

The school population continued to diminish as the military mission of Baumholder began to shrink during the drawdown of troops in Europe. As a result, during 2007 it was determined that Neubruecke would be closing its doors and students would be bussed the following year to Smith Elementary School in Baumholder. Although this caused a great deal of stress to the military community with soldiers deployed, efforts were extended to partner with Smith Elementary School. The school population of Neubruecke had gone below 200 students, and it was determined by staffing criteria that the specialist support services would be better served at a larger school that was more adequately staffed. Special efforts were made to make this transition work smoothly, even though it was during a major Iraq deployment. Neubruecke students spent a day with Smith sponsors attending classes and specialist classes together. This bonding helped with the transition.

Neubruecke Elementary School created many great celebrations during the spring of 2008. Willy, the Wildcat, the school mascot, said “Tchuss” and the school officially closed its doors at the end of that school year with a grand farewell! 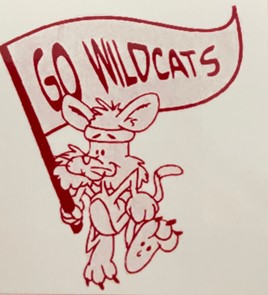 Contributors to this history