On September 15, 1946, the American Dependents School on Okinawa began operation at Okinawa University Dependents School under the direction of Dr. Theodore Koob as principal. When Okinawa University School opened its doors to students in November of 1946, it was only ready for the first to sixth grade students. It was sometime after that when the upper grades were included in the learning process. The very fact that the school opened so late in the year must have made it very difficult, if not impossible to have much in terms of extracurricular activities. There was absolutely no evidence that any activities were offered this first year. As far as is known, there was no yearbook, there was no student council, there was nothing, just school. It is probable that the younger kids started in November 1947 and the older started at some point later. It is known that the entire student body was in session prior to February 1947. So, it is believed that the older kids probably started in December or January. In the image below, we have what appears to be a class photo taken at the Okinawa University School Campus. This photo appears to be only younger kids. 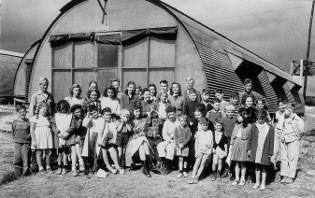 This original site was located on Route 30, Camp Hayward, overlooking Buckner Bay. The buildings comprising Okinawa University School served as a school during the day for the twenty-five students in grades 1–12 and as an education center for American military personnel at night, which was how the name was derived.

Dependents arriving on Okinawa in 1946 were warned that there were no schools planned for children, but by September the principal, nine teachers, and a Quonset hut were ready for school to begin. The teachers, mostly dependent wives and a few military personnel, had multiple assignments. The first students rode to school in weapons carriers. Later, when the enrollment reached seventy-five students, students rode in two yellow school busses driven by GIs, one each for the Awase and Buckerville housing areas. The busses resembled paddy wagons with bars on the windows and a single door in the back.

The school occupied existing university buildings for most of its time at this site. In March of 1947, a jumbo Quonset was built specifically for the school and all grades were under a single roof. This Quonset contained approximately ten rooms to accommodate the increase in enrollment. Enrollment had risen from twenty-five in September 1946 to seventy-five students in April 1947. In April of 1947, the Quonset burned to the ground, due to faulty wiring, and students returned to the existing buildings to finish out the year. These buildings included a nearby chapel and an abandoned theater which was hastily partitioned for classroom use. In April 1947 of the first school year, a separate, large Quonset containing approximately ten rooms was built to accommodate an increase in enrollment.

The first teachers were recruited from the on-island dependents pool, as there probably was no time to recruit, hire, and transport professional teachers from the States. The first teachers recruited from the United States arrived in 1947. Herbert Wildman was superintendent of these pioneers. The next year W. J. Howland became superintendent. It was through his efforts that the high school part of the school became accredited by 1949.

During the second school year, 1947-48, enrollment increased to 149 students in grades 1–12. A new school facility was obtained. Fifteen prefabricated structures, plus a theater, were used to house the 149 students. During this 1947-48 school year, a kindergarten and nursery school were started in a Quonset hut, used also as a Masonic Temple. This Quonset hut was located in the same general area of Awase, in a section called Takahara.

During the third school year, 1948-49, enrollment increased to 264 students in grades 1–12. Because of the increased enrollment, the high school, grades 6–12, moved to four new Quonsets at the edge of the old athletic grounds in Awase. The elementary grades, 1–5, remained in the prefabricated structures, which they had occupied during the 1947-48 school year. The kindergarten remained in the Masonic Temple Quonset.

Before the fourth school year started, typhoon Gloria hit Okinawa with winds up to 160 miles per hour. The high school Quonsets were almost completely destroyed. It also seriously damaged the prefabricated units which housed the elementary grades. School started late that year, 1948-49, opening on September 28 in Quonset huts located in a housing area known as New Zukeran. Some classes were also held in family living quarters. Typing and bookkeeping classes were held on back porches, English and History in a bedroom, and Mathematics in a living room. Miss Lois Buckingham, later Mrs. Shook, recalled, “The math classes had it easy; they were in the living room. English in the bedrooms wasn’t so bad, but out on the porch, the business classes were miserable.”

In late October, approximately 130 students in grades 7–12 were moved back to several large, repaired Quonset huts in Awase. Total enrollment for the 1949-50 school year was 325 students, with 130 pupils in grades 7–12, and 195 pupils in grades 1–6. The following school year, 1950-51, witnessed the passage of historically important legislation for the dependents’ schools on Okinawa. The Second Session of the 81st Congress passed Public Law 871 which gave financial support to the military for the dependents’ schools. This was also the year that the United States entered the Korean conflict, resulting in a ban on allowing wives and children of military personnel to travel to Okinawa. Because of the ban on travel of dependents, the total enrollment for 1950-51 was 346, which was only slightly higher than the previous school year. The Army’s Far Eastern Command on Okinawa built three new Quonset structures to accommodate the high school. The name of the high school was changed to the Okinawa American High School, instead of the Okinawa University High School. During the summer of 1951, the ban on dependents travel was lifted and enrollment jumped to 543 students. This was the last year for all 12 grades to be located in the same area at the Awase Complex.